We’re Ready When You Are: Far Niente and Nickel & Nickel are Open For Tastings. Learn more 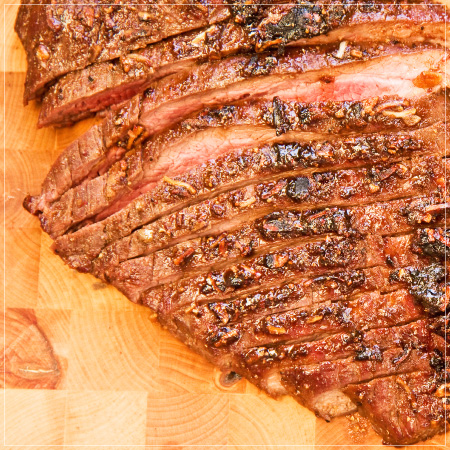 4 large turnips, peeled and
sliced very thin on a mandolin

Brush the 4 portions of flank steak with olive oil and season with salt and pepper. Grill on high heat for 4 minutes on each side. Flank steak cooks quickly and is best served medium rare, so be careful not to overcook. Allow the meat to rest for 3 minutes, then slice against the grain into 4 or 5 pieces.

Gratin:
The desired result of this gratin is to have a top layer that is caramelized and crunchy. This method is really fast and easy–you may never make gratin another way! Grease an 11”x14” jelly roll pan with butter and season with salt and pepper. Tightly shingle the turnip slices one layer deep on the sheet pan, then drizzle evenly with cream, followed by an even sprinkling of Parmesan cheese. Bake at 400 degrees until the top is bubbling and golden brown. Allow gratin to cool, then cut into four equal squares.

Black trumpet mushrooms are notoriously sandy so they have to be washed several times before they are cooked. Cook the mushrooms in a hot sauté pan with a little olive oil until the liquid evaporates and the mushrooms begin to carmelize. Then add thyme, garlic, half of the shallots, butter, salt and pepper. Toss for a minute, while the butter browns and the shallots sweat. Remove the thyme sprigs and garlic cloves before serving.

The rainbow chard greens should be removed from the stem and sliced into large pieces. The stems can be sliced thinly on the bias. In a hot sauté pan with a little olive oil, add the stems and remaining shallots. Allow to sweat for a minute, then add the leafy greens and stir the all the ingredients as they wilt down and release their water. Season with salt and pepper to finish. To assemble, place a square of gratin on a plate. On one corner of the gratin, place a spoonful each of chard and mushrooms. Arrange overlapping pieces of steak against the chard and mushrooms.