Far Niente’s Cabernet Sauvignon is produced exclusively from grapes grown in the Oakville Viticultural Area of Napa Valley. Ninety percent of the grapes are from The Stelling Vineyard, our estate vineyard located behind the winery at the base of the western hills of Oakville. The remaining ten percent of the fruit comes from our Sullenger Vineyard and one other small estate in Oakville.

The growing season was mild overall, but marked by a few notable weather events, including a light spring frost, heavy rain in May during bloom, cool temperatures in June and August and two heat spells in September. During harvest, we experienced absolutely no morning fog, and thus, no humidity. This very dry weather lasted for a couple of weeks into early September, and was followed by hot, drying winds toward the end of the month. We hadn’t seen winds like these since 1991, which was the year of the famous Oakland fire.

The fruit expression of this wine flows from the glass! Very concentrated aromas of black cherry, plum and huckleberry deepen to black currant, spice, tobacco and dusty, toasted oak. The wine’s soft entry on the palate leads to notes of licorice and black fruit, a dense mid palate and a rich and coating texture, followed by a long and velvety finish. 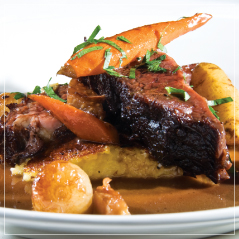